View all posts by 1riyam 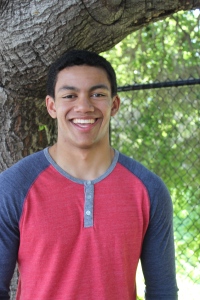 Miles Fowler’s acting career began over a pair of shoes. Growing up, Fowler had always been captivated by sports. So when his mother brought up the idea of trying out for a Menlo play, he remembered that “there was this pair of basketball shoes – Nike shoes – that I really wanted, and my mom said, ‘OK, if you try out for the play I’ll get you the shoes.’” Fowler joined the cast of Arsenic and Lace in 6th grade as the tax collector. But it wasn’t until his junior year of high school that his love for theater began to take off. Fowler was cast in Our Town, as the irresponsible, kind teenager George Gibbs, his first show with Menlo’s new director Steven Minning. Fowler “saw how much time and effort it takes [to do] theater,” and began to realize that theater was something he wanted to pursue. He loves that theater has the ability to “create emotion that seems to be lost in everyday life.”

Fowler cites his grandmother as one of his main inspirations. “The joy I get from her telling me about different characters that she remembers me playing, or different memories I can create from her – that’s what inspires me to act.” But Fowler is also inspired by the audience’s appreciation of the time and effort put into a production.

Now, he’s taking the Menlo stage for the ultimate show of his high school career, as Tevye in Fiddler on the Roof. Fowler considers himself a serious actor, and is trying to work on the comedy behind the character of Tevye. He finds the “cultural richness” behind Fiddler a tremendous learning opportunity for himself and the audience. Though Fiddler marks the end of Fowler’s Menlo acting career, he plans to double major in Political Science and Acting at the university he attends next year.

“Without tradition, our lives would be as shaky as a fiddler on a roof!” Fowler’s Tevye proclaims. And as one of Fowler’s personal traditions comes to an end, he will always remember all his shows and “opening nights where you’re really nervous.” With every bittersweet ending, there is always something to be “joyful about” – and that is watching Fowler grace the stage one last time.